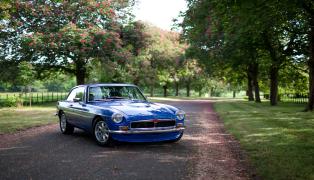 Classic car ownership has never been so popular. Many collectors aspire to own popular models like Jaguar’s enigmatic E-Type Lightweight or Ford’s Capri. Whilst gaining ownership of the Capri might at least be possible for some, with price tags starting around £1,000,000, the very special E-Type is out of reach for those on a budget. Even standard E-Type’s have asking prices starting around £50,000, with some currently advertised at more than double that level. Due to COVID-19, there is the potential that an increased volume of classic cars will rotate back into the marketplace, as the economy bites and unemployment rises.

As we look ahead and consider the classic cars of the future, it is worth considering some of the elements that make them appealing in the first place. It helps if they are a good-looking car, and a sporting pedigree often enhances appeal and value. However, possibly more important is that people have an emotional connection with the model. Today, it is increasingly apparent that a special reminder of one’s youth is highly prized.

Finally, the scarcity of a model has a major effect on desirability and value. Strangely, it also helps that many of the cars considered classics today, were not built to a high standard. Due to this, many were destined for early graves at the scrapyard.

In the year 2000, there were 24.4 million cars on UK roads. In 2019, there were nearly 32 million. Interestingly, the proportion of older cars has increased, with just over 2.3 million cars over 13 years of age in 2000, increasing to over 6 million in 2019. Saving old cars of interest has become big business, fuelled by an ever-increasing nostalgia for modern classics. Ford Escorts and Fiestas, Volkswagen Golfs, and Peugeot 205 GTis from the eighties and nineties are highly desirable today.

Glass’s Leisure Vehicles Editor Paul McDonald said, “Following a significant boost in registrations over the last few months, a slow-down in September was not unexpected, as recent growth was partly a result of pent-up demand following lockdown. So, to see the increases continue is great news”.

With the major auction groups continuing to hold only online sales, some buyers continue to be wary about spending substantial amounts of money on vehicles they have seen in person. However, this trust continues to improve as buyers become more accepting of the descriptions provided by the auction houses.

By the mid-nineties, car build quality and reliability had improved dramatically whilst the driveability of cars had also taken a step forward. New cars of today continue these improvements, but many people are choosing to look for older, more characterful cars to drive every day. This is not only down to the price, fueling the demand many enthusiasts strive to drive something unique and with historical interest.

There is no definitive age that identifies a classic car. Many hold the view that a modern classic will be at least 15 years of age, and a classic must be at least 25 years old. However, if you use car tax exemption as a guide, then the car needs to be at least 40 years old.

Many people find driving a modern classic car is without status, which is a very desirable commodity in today’s world. Especially if a modern classic is relatively easy to afford. So, looking ahead, there are models that could already be considered modern classics. It is also worth remembering that with improved build quality more survivors of each vehicle could also affect the future asking prices.

The following examples are all over 15 years of age and remarkably can be bought today for under £1,000. As beauty is in the eye of the beholder, the decision on whether they are a modern classic is yours.