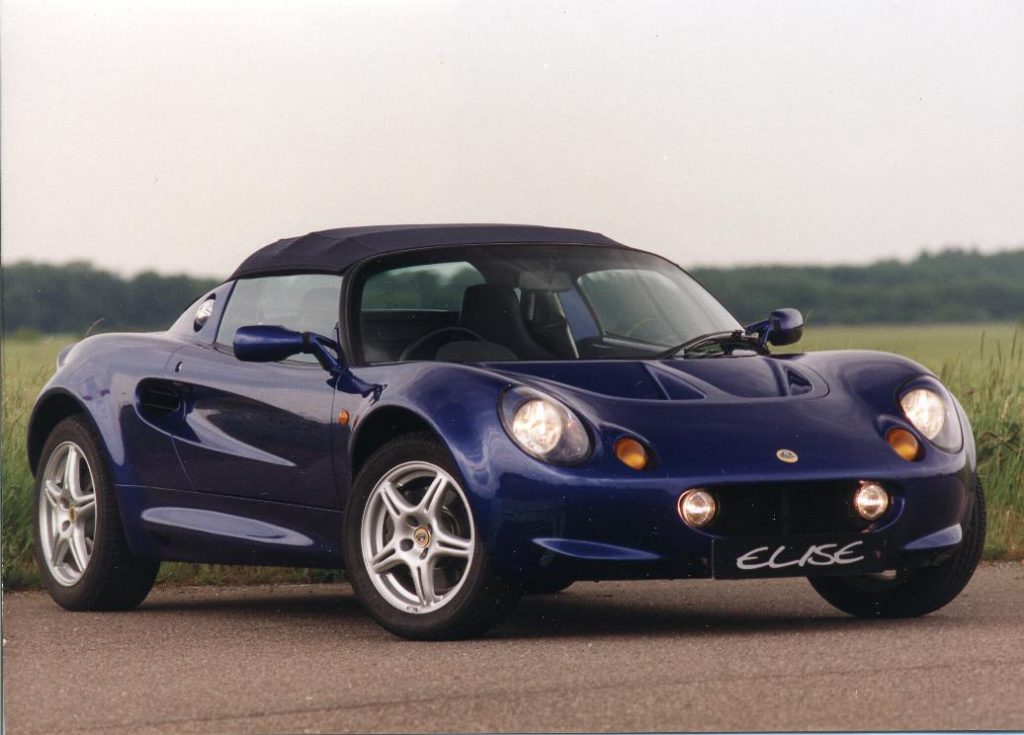 In 1996, Lotus released the Elise. A lightweight fibreglass body over an aluminium frame, it weighed in at just 725kg. Although only powered by an 118bhp Rover K series engine, it raced to 60mph in just 5.8 seconds, fast by 1996 standards!

The Lotus Elise effectively replaced the much-maligned front wheel drive Elan, which suffered from its launch in 1989. Considered too expensive, the Elan struggled to compete with the Mazda MX-5, which launched in the same year.  Lotus purists never accepted the Elan, as it broke away from the Lotus philosophy of rear wheel drive, unfortunate really, as it was actually a decent car. The MX-5 had rear wheel drive and cost much less than the pricey Lotus and ultimately proved more popular. Following the demise of the Lotus Elan in 1996, this car actually survived for three more years, living out its final days rebadged as a Kia.

Learning some tough lessons, the Elise Series 1 was everything the earlier Elan should have been from launch. There was almost nothing to catch it through twisty roads due to its superb handling, all that from a car hand-built in Norfolk.

Over recent years, Series 1 models have achieved collector status, with values exceeding the prices realised by early Series 2 models. The most highly prized are very early S1 models on an N or P plate, which achieve even greater premiums especially if they have the MMC Aluminium ceramic brakes. The 111S introduced in 1999, which had the addition of a rear wing and upgraded seats, commands a £2,000 premium. Special edition models like the Sport 135, Sport 160, and Sport 190 are rarer still and fetch notable premiums.

The Series 1 ceased production in 2000 replaced by the Series 2. Part funding of the S2 development program came from General Motors, with the car retaining the Rover power plant until the end of 2005. The change to the Toyota engine units began in March 2004 with the range topping 111R model. The last nine months of the Rover engine models carried customer purchase incentives including free hard tops and electric windows. The demise of MG Rover in 2005 signalled the end of Lotus’ use of the K series power unit.

For 2006, the Elise was available in two revised versions the S and the R, both using Toyota engines. The S developed 134bhp and the R was more powerful at 190bhp, this more powerful version commands up to a £3,000 premium over the lower powered unit. With a desire for evermore power, in 2008 the SC version arrived. SC stands for Super Charger, which produced 218bhp; again, these versions command a premium in the used market of an additional £1,000 over an equivalent 190 version.

In 2010, the Elise underwent a notable facelift, including a new front end; with the indicators now incorporated under the headlight cover. Many have referred to this change as the Series 3, although this is not an official factory designation. This was the post-recessionary period, with few models produced leading to them being quite rare today.

The penultimate model released was the Cup or Sport 220 (220bhp). Production commenced in 2014 for the 2015 model year, with current retail prices in the low £40,000 region. Finally, the Cup 250 (250bhp) released in 2017, now retail in the £50,000 price range but as with all later plate models, depreciation in most likely, in contrast to early models, which are now in value ascendancy.

After 23 years of production, what does the future hold for the Elise? Suggestions are that it has run its course and despite its successes and trueness to Colin Chapman’s original “simplify, then add lightness” design philosophy of the 1960’s, the Elise seems likely to face an uncertain future, as more powerful and luxurious sports cars command the current performance market.