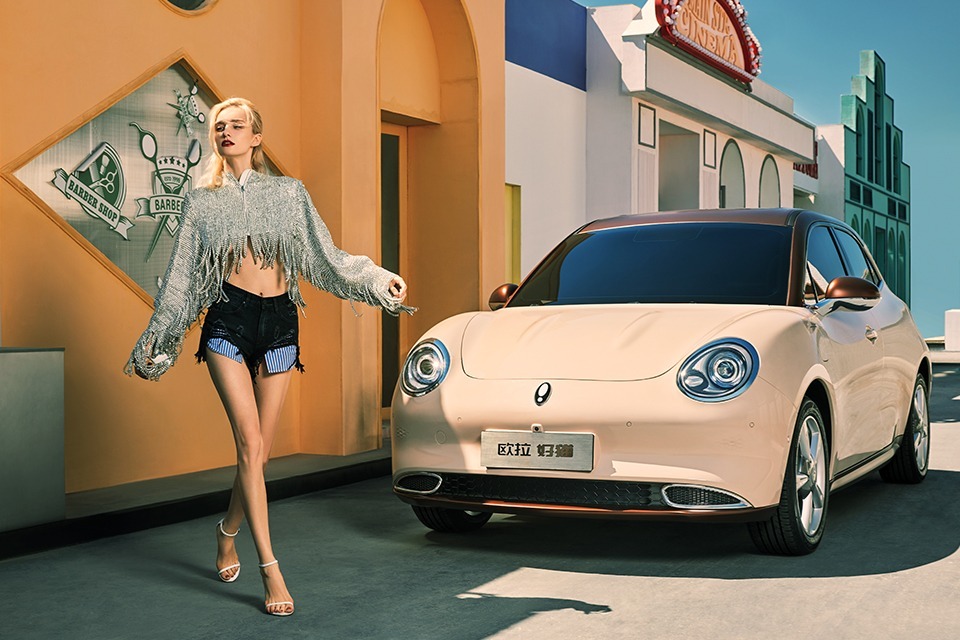 Newcomers used to be easy prey for the giants in the automotive market, but with the disruption of electrification, they have become hunters. José Pontes, data director at EV-volumes.com, considers the strategies of one of the most daring Chinese EV makers, Great Wall Motor’s ORA brand.

Created as a dedicated battery-electric vehicle (BEV) brand by Great Wall Motor Co. of China, ORA, which stands for “Open, Reliable and Alternative”, started out in 2018 with two distinct models, the R1 city car and the larger iQ5 crossover.

Unlike the weirdly proportionated iQ5, the cheeky little R1 became a success, which allowed the ORA brand not only to survive its first steps, but to expand its line-up with the R2. This successor is a slightly larger city car, with a design not unlike some Japanese and Korean high-roofed city cars.

The first ORA cats are born

In the second half of 2020, the compact Good Cat was introduced, and with it, Great Wall Motor’s ORA cat-family theme was unleashed, with the R1 being renamed as Black Cat, and the R2 as White Cat. The names come from a Deng Xiaoping quote: ‘No matter if it is a white cat or a black cat; as long as it can catch mice, it is a good cat.’

If the previous models already had their distinct personalities, the Good Cat took ORA’s design one step beyond, thanks to design director Emanuel Derta, who worked for Porsche for five years.

Derta was probably a frequent visitor to Porsche’s Museum, because the front design of the Good Cat is somehow reminiscent of the Porsche 356, or early Porsche 911s. The rear of the vehicle is more its own design, taking cues from what a Toyota Corolla could look like in 2030.

The interior is also innovative and retro-futuristic, but this is not a case of ‘all show and no go’ – the specifications support the distinctive design, as proven by the 143hp (171hp in GT spec) electric motor and 63kWh NMC battery (a 48kWh LFP battery is also available), allowing the Good Cat to have an electric range of 420km WLTP.

This compact (4.24m) model is ORA’s first EV planned to be taken to overseas markets. It is already present in markets like Thailand and Costa Rica.

Europe is also in ORA’s sights, with the Good Cat, or simply 01 Cat, as it will be known in Europe, set to land during the summer 2022 in top specification (171hp electric motor, 63kWh battery). With prices expected to start at around €30,000, the initial list price does not seem to be as low as one would expect, but given the comprehensive standard equipment, it becomes attractive, as it is in the same segment as the VW ID.3 or Nissan Leaf.

But if ORA wants to make an impact in Europe, just one model will not be enough. This is why Great Wall Motors has confirmed that the upcoming Lightning Cat midsize sedan will eventually be made available in Europe, as the 03 Cat.

This is another ORA Cat model where Porsche’s inspiration is visible, not only from the front (911), but also from the profile (Panamera), and once again the specifications follow the striking design with decent numbers. There is an 82kWh battery pack, allowing some 450km WLTP range, and 300kW electric motors, giving a 0-100km/h time of 3.5 seconds.

These days, an SUV crossover is mandatory for every self-respecting carmaker. Hence the third model for Europe will be the Cherry Cat, a compact crossover that might seem less design-driven next to its ORA Cat siblings. In reality, it is not an ORA model but a reskinned model from WEY, another Great Wall Motor brand, specialised in more premium-like crossovers.

ORA has a number of challenges ahead when it comes to establishing itself as a significant EV manufacturer in Europe. These include, but are not limited to:

It will be interesting to see if ORA dares to bring the Punk Cat to Europe. In other markets, Volkswagen has already indicated that it reserves the right to take legal action against any perceived model or design violations.

While the ORA Cat specifications are not necessarily bad, there are models in the same category that present higher range (VW ID.3). Most direct competitors have higher charging speeds than the (Good) Cat, which tops out at 80kW. ORAs are cars that attract because of their overflowing personalities, with their respective specifications doing enough not to be deal breakers, not the other way around.

No customer base or dealer service

One challenge for Great Wall Motors in bringing ORA to Europe is that, like a start-up company, it will have to start from scratch to build a customer base and dealership network. Added to absent brand recognition, it will have to work harder to make itself known and win the trust of the public.

BEVs are not attractive without dense, reliable charging infrastructure (CI). Drivers should be able to plug in while on the road, avoiding charging anxiety, which can be as damaging for BEV adoption as range anxiety. CI differs greatly from country to country. For example, in the Netherlands, the density and availability of EV charging points allow drivers to travel without major concerns. In most other countries, CI is sparse, limiting BEV success.

This is something that Tesla has completely prepared for in any given country, as it deploys its top-notch supercharger network simultaneously with the start of official sales.

Due to aerodynamics and skateboard-compliant batteries and platforms, BEVs tend to have similar looks and profiles, thus making them harder to distinguish in a crowd. Not so with ORA. Despite having elements inspired by models of other brands, Great Wall Motors has managed to create models that are cute, original inside and out, and appealing to both genders, something many brands have struggled to do successfully.

Great Wall Motors has a partnership with Mini’s parent company, the BMW Group, called Spotlight Automobile, owned in equal terms by both carmakers. This is a cheeky deal considering there is some similarity to the Mini with ORA.

The deal establishes that the next-generation Mini Cooper BEV, said to arrive next year, will share mechanics (batteries too?) with the Good Cat, but in a smaller, more premium format.

And expect a long list of equipment, even in base trim, like standard LED lights (front and rear), 18-inch alloys, a pair of 10.25-inch screens with smartphone mirroring, rear parking sensors, a 360-degree camera, facial recognition, and a suite of driver aids. So, it could become a cut-price alternative to Mini’s electric offerings.

Two of the most impressive characteristics of many Chinese EV makers, among them ORA, is that they have prolific new-model launch calendars. Despite being just four years old, ORA has already launched four models (iQ5; R1/Black Cat; R2/White Cat; Good Cat) and with a few more on the way, it has ramped up model production fast. The R1 ran from 0 to 4,000 units/month in just three months and the Good Cat from 0 to 3,500 units/month in six months.

When launching a new brand in Europe, ORA should be able to respond accordingly if it faces surging demand, thus avoiding the formation of year-long waiting lists that plague many European carmakers.

With the ever-growing share of leasing registrations and numerous new ownership models, there is a new automotive trend of ‘giving it a go’.

Customers are not as risk-averse as they used to be and are more willing to try new brands and new concepts. The shorter the holding period, the less risk-averse customers are. Also, ORA includes a five-year vehicle warranty as further encouragement.

One of the reasons why ORA is flexible with its production flow is because its battery supplier, the innovative SVOLT, is part of the Great Wall Motor group. It was one of the first battery makers to have cobalt-free lithium manganese cobalt oxide (NMC) and this means that ORA is a preferred battery customer and benefits from not being subjected to the current volatility of supply and demand that is troubling many vehicle manufacturers that are dependent on third-party battery suppliers.

It is a little-known fact that Chinese brands were responsible for over half of the BEVs registered in 2021 globally. With the exception of the already-established MG brand, which is part of Chinese carmaker SAIC, 2022 will be the first year that Chinese car manufacturers export to Europe in significant volumes. Great Wall Motors is looking to be one of the first to surf this wave, with the 100% BEV brand, ORA.

The ORA Cat family looks to be a promising line up in a rapidly-increasing market and their cuteness and personality could appeal to a public that has not yet been drawn to any particular brand or does not find a satisfying electric model among established brands.

With the right price and/or finance deals, the ORA Cats could prove to be quite popular on the continent. Last year, MG sold 52,546 units in Europe, serving as a guideline for the future.