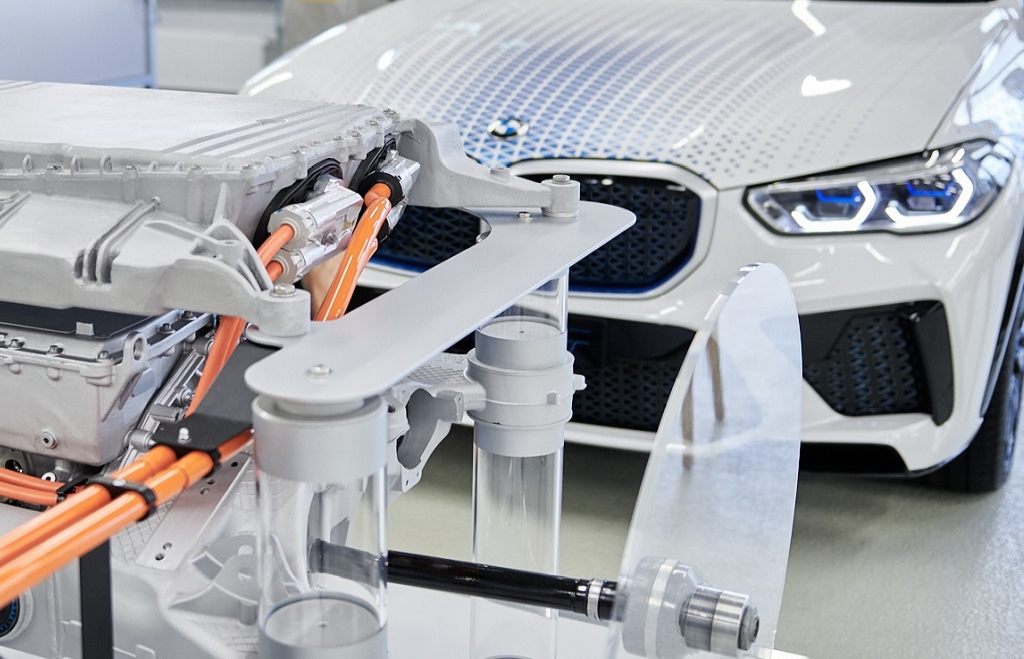 BMW has confirmed that its i Hydrogen Next technology will go on sale in 2022, with a new model, based on the current X5, becoming the first to feature the powertrain.

The carmaker announced plans to develop a hydrogen drive system for sale last year. However, since then Daimler has pulled out of developing the technology for passenger vehicles, while pressure has increased on all carmakers to create electrified drivetrains to lower average emissions. But the German manufacturer remains committed to hydrogen, seeing the long-term benefits of the zero-emission technology.

The carmaker has been working with Toyota, a leader in the development of hydrogen powertrains, to develop the technology for its vehicles. Since summer 2015, the BMW Group has been testing development vehicles, based on the BMW 5-Series GT, that are equipped with a jointly developed fuel-cell system.

The fuel-cell stack that will power the new BMW i Hydrogen NEXT model is an original development of the BMW Group, according to the company. The individual cells of the fuel cell come from Toyota. An automated research facility for the production of fuel-cell stacks is used in the manufacture of the X5 pilot fleet.

The testing of innovative production technologies is an important step in the preparation of scalable, time, cost and quality optimised production of hydrogen fuel-cell drives.

‘In the future, the hydrogen fuel-cell drive can be an attractive alternative to battery-electric vehicles (BEVs), especially for customers who do not have access to their own charging infrastructure and who often drive long distances,’ the company said. ‘With a sufficient refuelling infrastructure, hydrogen vehicles offer great flexibility, since the full range is available again after a short refuelling process of around four minutes – regardless of temperature conditions.’

Hydrogen has the potential to sit alongside BEV technology and create a two-fuel system once various countries ban the internal combustion engine. It offers drivers a longer range than some BEVs. At the same time, refuelling times are comparable to petrol and diesel, meaning those covering longer journeys would be able to do so with ease in a vehicle that only emits H2O from the exhaust.

Toyota has led the way with hydrogen development and was the first to bring a production car to market, albeit in small numbers. Hyundai is also developing the technology, while Daimler, which pulled out of researching and producing fuel-cell passenger cars, will instead focus on the use of hydrogen in larger commercial vehicles.

‘What we see today is a rapid shift into battery, because to produce fuel-cell power, you need to have an electric powertrain first,’ Toyota’s manager of alternative fuels, Jon Hunt, said at a summit earlier this year. ‘So that’s where the development is occurring, before moving to fuel-cell electric vehicles (FCEV).’

‘Notwithstanding that, there are many manufacturers who have huge issues of achieving their emission reductions to avoid fines. That means that they have to have a certain proportion of zero-emission cars. That is distorting the market.’

However, the current situation the market finds itself in following the coronavirus (COVID-19) pandemic and associated lockdowns may change the timeline of hydrogen development.

Carmakers are facing large fines if they fail to bring down their average fleet emissions by the end of 2021, and with the diesel market collapsing, the only way to do this is by manufacturing a technology that is already further along the development path – and that is battery-electric. With COVID-19 and the resulting economic turmoil, development budgets will likely be cut, and therefore hydrogen technology will suffer.

Yet with Toyota, Hyundai and now BMW actively pursuing hydrogen as an alternative fuel of choice, their development may aid others in the research of the technology. Toyota has already announced it will allow access to its patents around hydrogen.

BMW sees hydrogen as giving its customers another choice when it comes to vehicle powertrains.

‘Politicians have recognised the importance of green hydrogen for the energy system of the future,’ said BMW CEO Oliver Zipse, referring to the support of the German Government with the National Hydrogen Strategy. ‘We expressly welcome the various initiatives. For road traffic, an expansion of the infrastructure is now required, which takes into account the needs of both commercial vehicles and cars. Depending on how the general conditions develop, hydrogen fuel-cell technology has the potential to become another pillar in the BMW Group’s drive portfolio.’

Zipse added to his feelings about hydrogen technology at BMW’s annual general meeting (AGM), saying: ‘We continue to invest consciously in various technologies. This includes hydrogen fuel-cell technology. Ultimately, this is the most intelligent and fastest way to effective climate protection.’

The carmaker’s Leipzig plant has been operating hydrogen-powered industrial trucks since 2013. The use of innovative hydrogen technology offers the site the long-term opportunity to further promote decarbonisation.

‘With the National Hydrogen Strategy and the billions promised to be implemented in the economic stimulus package, the Federal Government has sent a clear signal,’ said Peter Altmaier, Federal Minister for Economic Affairs and Energy, while visiting the Leipzig plant recently. ‘We will shape the framework and actively support the economy in the development and use of hydrogen technology. However, the marketable implementation of hydrogen technologies lies with the companies. And I am therefore very happy that there are many companies like BMW in Germany that have the vision, the courage and the innovative strength to make this technology a market success.’

The system performance of the BMW i Hydrogen NEXT comes to a total of 275kW (374hp) according to the carmaker.

‘With the drive system of the BMW i Hydrogen NEXT, the fuel-cell system generates up to 125 kW (170hp) of electrical energy, which is obtained from the chemical reaction of hydrogen and oxygen from the air,’ says Jürgen Guldner, head of BMW Group Hydrogen Fuel Cell Technology and vehicle projects. ‘This means that the vehicle only emits water vapour.’

The electrical converter, which is located below the fuel cell, adjusts its voltage level to that of the electrical drive and the power buffer battery. This is fed by both the kinetic energy from braking and the energy of the fuel cell.

The vehicle itself houses two 700 bar tanks, which together hold six kilograms of hydrogen. ‘This guarantees long ranges in all weather conditions,’ Guldner adds. ‘The refuelling process only takes three to four minutes.’